Work has now started on a major project to renovate the Rotunda at historic Northwood House in Cowes, Isle of Wight.  Significant work is being undertaken on the iconic entrance dome part funded by a grant from the Coastal Revival Fund.

The Rotunda – opened in 1838 – is a unique Georgian structure.  The dome was formed over bricks using medina cement render to the internal and external faces. Through the years various repairs have been undertaken, but the structure suffers badly from water ingress.  Many layers of later coatings including paint, bitumen and plaster have been carefully removed to find the original dome that George Henry Ward would have seen.

This week StressUK – world leaders in historic building support and restoration – will apply a carbon fibre support coating.  This is the first time this technique will be applied to historic plaster enabling the existing structure to be preserved and protected without piercing or damaging the original materials.

The dome roof is a critical part of the project to restore the Rotunda to its original splendour as the grand entrance to Northwood House – an entrance that has welcomed prime ministers, dignitaries, royalty and the Isle of Wight community for over 180 years.

In addition to the roof project, detailed restoration is taking place inside the building including stripping layers of paint from the Georgian pillars, cleaning and refurnishing the historic stone floor and repainting the interior in period colours.

Tim Wander, the Charity’s Project Manager said, “as always once you peel back the layers of an old building there are always some unwelcome surprises and challenges to overcome. But we have a great team on site and some ground-breaking technical solutions to recently found structural issues that have just been agreed with Historic England.”

Roseleen Cullen, Chair of the Charity added “We are delighted that this essential work is underway to preserve and protect this unique part of the House through which visitors, staff and tenants pass every day. The House has watched over and supported the town and people of Cowes for over 180 years and this work will ensure it can continue to do so long into the future.”

Work on the project is hoped to be completed by the first week in June, subject to weather and any unforeseen factors, in time for the busy summer event season at Northwood House. 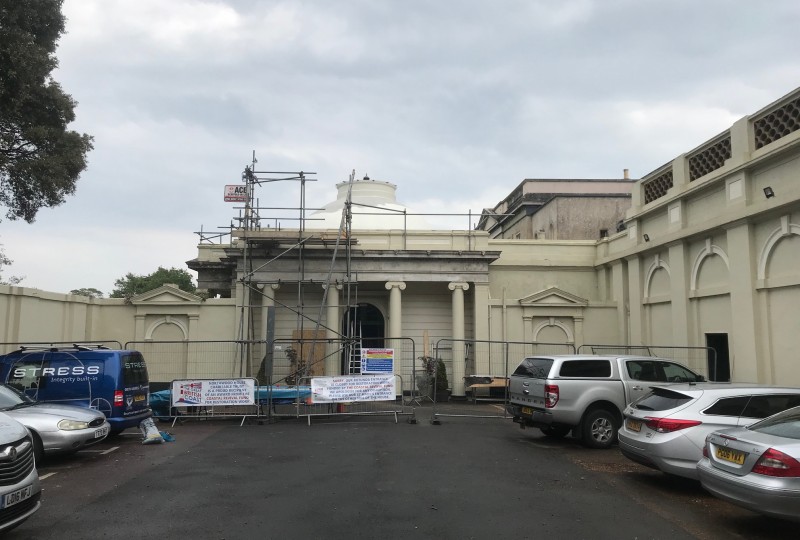 Note to Editors:  Additional photographs and drone footage for online publications can be made available.

The Estate has a rich history of hosting events and celebrations of all kinds.  Purchased in 1793 by George Ward, a successful London merchant, the House was rebuilt and extensively decorated by his son, George Henry Ward. Many lavish parties were thrown by the Wards throughout the Victorian era when the Island was a popular destination for the Royal family.